So, I’ve been back in Sweden for almost two weeks. Since yesterday was a holiday (May 1st, International Workers’ Day) and today is Friday, I’m off today as well – it’s a so-called bridge day, or squeeze day as we Swedes would say.

And what better to do on a squeeze day than to squeeze the most out of the extra time it gives you for things that you don’t have time for in your busy, silly, working-full-time everyday life?! Hence, I’ve baked crisp bread, dealt with the washing up, played uke (I want to hold your hand and Brand new colony – good uke covers!), and created an add for renting a house/part of a house. Now I’m blogging. (No shit?) After that I’m playing squash.

Now, this was supposed to be a picture summary of the rest of my tour and trip. Problem is, I didn’t take any pictures when I was in Cardiff and Swansea busking, nor when I did my two Cardiff gigs. I did take pictures of my time off though.

The last thing I mentioned in my last post was going into Cardiff for a gig. It was a good gig but the crowd was weird. That was Saturday April 12th.

Sunday the 13th: Me, my sister, her husband, and their kid went to their allotment: 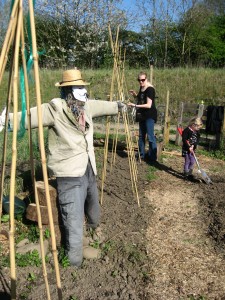 Monday the 14th: My sister had the day off. Me, her, and the crazy 3-year-old went to St. Fagans National History Museum. We didn’t really look at the historical houses and all that stuff, we had all been there several times before. We had picnic and then ice cream. Day trips to me are primarily about food. I was content.

Tuesday the 15th: Swansea busking trip! Had a good time, made good money.

Wednesday the 16th: Open mic in Llandaff Institute. They liked me so much that they asked me to contact them when I’m in Cardiff again so that they can book me for a night. Non too shabby.

Thursday the 17th: Cardiff busking in the day, if I remember correctly. It was a bit less friendly than Bristol and Swansea, especially Queen Street which was just too busy. Still, I met several nice people and made some money.
In the evening, I played an open mic in Face 11. Friendly café/bar, good crowd (including two Swedes who were the only people there to understand the lyrics to all my songs). The open mic people in Face 11 also asked me to come back. Success!

Friday 18th: Easter holidays began. We didn’t do much.

… and feeding swans by the lake. 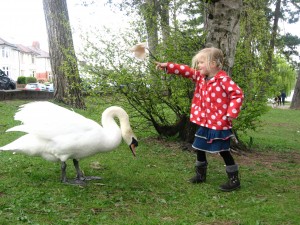 Easter Sunday 20th was like any Easter Sunday (or Påskafton, Easter Saturday, if you’re in Sweden): Food, sweets, fun. And, unfortunately, heavy rain. I got soaked to the skin on a walk around the block.

On Monday the 21st, I left for Sweden. On a train on the continent, I met a lovely Italian UK resident who was going to Gothenburg for a conference. She gave me some vegan coconut cake she’d made and we talked about languages, about politics, and about differences between the political systems and people’s mentality in different countries.

It’s good to be home and get to do all the little things I like in my everyday life, but I miss the tour feeling, the openness, the many meetings … the acceptance and encouragement from people in the UK. (On the topic of differences between countries.)

At least I’ve got a gig in Gothenburg on Friday May 9th. See you there, perhaps?